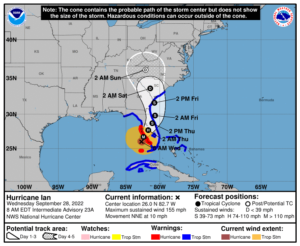 Our office decided to close at 1PM yesterday due to the threat of Hurricane Ian.  A couple days ago the forecast path kept sliding west however in the last day the track had reversed, sliding more and more east which is bad news for us.  Once I got home I put a few more things away but put my trust in my new hurricane impact windows.  A number of people put up hurricane shutters last minute.

The rest of Tuesday was spent watching the rain pile up outside, the property was already flooded before the sun went down.  I watched a lot of the local news coverage of the storm but also took breaks to watch some “normal” stuff.  There is a limit to how much of the fear stoking broadcasts I can watch at one time.

When I went to bed it was still raining hard but not horribly windy.  I got awakened several times during the night by Elsa.  One time she crawled all the way up to my head.  I pulled the blanket over her and covered her with a pillow as well.  Despite my efforts she was still scared.  I was then worried that she had to go to the bathroom so I walked her outside into the storm in my underwear.  It didn’t seem like she had to go urgently.

I finally fell back asleep and didn’t open my eyes until 8AM.  When I looked out the window it was extremely dark with standing water everywhere.  The trees were now getting whipped consistently by the wind.  I looked at the latest NOAA graphic and couldn’t believe the max wind of the storm had exploded to 155MPH, a couple ticks below category 5.  It was still off the coast with the eye almost even to the house.  What a shit show.  The projected path would have it make landfall somewhere close to the Lee/Charolette county line.  The property in the path of those core winds are going get smashed, however that might not be the worst of it.  This afternoon the storm surge from the storm is going to start pushing onshore and it is predicted to be as much as 12-16 feet in some areas.  In the Naples area there could be substantial surge as well which can be absolutely devastating.

For me, being 17 miles inland is a good thing with this storm.  I don’t think I will see hurricane force winds here although there have been some very strong gusts already.  Flooding is a given so my biggest concern is power outages.  Irma 5 years ago resulted in almost two weeks of no power madness.  I am crossing my fingers I can avoid a similar situation this time around.  The story of this storm is not going to be completed for at least 18 hours.  It is going to be a very long day.