Yesterday was the first day post storm.  It brought with it horrific pictures of the destruction.  This was truly worst case scenario thanks to the storm surge.  It made me feel all the more fortunate to only have some minor landscape damage to deal with.  Mid-morning I drove into our main office with Elsa along. The drive was challenging as almost every traffic light was out.  It seemed about 50% of the drivers were aware of the “treat like a 4 way stop” rule when signals are dead.  I also got to see some of the mess ranging from downed trees to roads with lots of debris from when they were underwater.  I needed to see what was and was not working.  Everything at the main office was good to go but most of our branches were offline.  The branch at Marco Island was totally flooded out, meaning it could be a very long time until it resumes operations, if at all.  I got the information I needed for now and headed home.

The few gas stations that were open were being pummeled with lines reaching a half mile or more.  I had between a half and three quarters of a tank left in the Tacoma so I deemed it good enough.  When I got home I decided I wanted to get started on some the issues in the yard from the storm.  The first and biggest issue was the avocado tree.  The winds late in the day yesterday combined with the saturated ground resulted in the avocado tree leaning hard to one side.  I used a ratchet strap attached to the Tacoma to help pull it the other way.  I then used some old metal temporary fencing posts on the opposite side to keep it there.  It doesn’t look beautiful but it seems to be doing the job.  I also cut several of the low hanging branches to even things out.  The storm and my pruning resulted in a ton of not quite ripe avocados falling to the ground.  I am going to give some to Monique and keep a few for myself, hoping they ripen up. 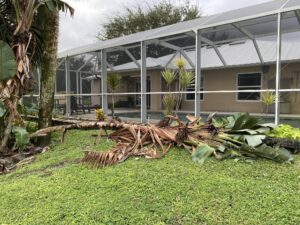 I also cut up the bird of paradise that fell.  I felt lucky that it did not fall into the pool cage.  I did several runs back to the fill pit with the tractor to dump debris.  At spots I was rolling through standing water approaching a foot deep in the back yard.  I was glad I did not get stuck.  I also did some work in the chicken area.  I took down almost all of the corrugated plastic roof panels that I had attached to the run for rain protection for the birds.  They looked like shit and weren’t needed anymore.  I also disassembled the temporary shelter I made a few years ago for them to reclaim some lumber for future use.  Doing this invoked emotions of sadness in me, undoing what I did on their behalf, but it needed to happen.  I have more undoing in there to do this afternoon hopefully.

Later in the afternoon I was excited to realize my internet service was restored.  I was limping by with my limited access on my phone but it felt nice to be hard wired once again.   I was talking to my buddy and former boss Don.  He had no power yet.  He came out last night with Lucky to watch the Dolphins/Bengals game on Amazon Prime. (he is a Fins fan)  The quality of the broadcast sucked with pixelation of the picture the entire time, something that evidently has plagued every game Amazon has streamed so far.  I am surprised that Amazon can’t get live streaming figured out.  The Dolphins lost the game but it was nice having Don and Lucky there.  They slept over, being the first to use my guest room in it’s latest iteration.  Don said he slept well.  They headed out bright and early this morning.

Today we woke up to glorious weather with low humidity and temperatures in the 60’s, something we have not experienced in close to 6 months.  I opened the windows and really enjoyed stepping outside.  Mid-morning I headed to another branch to do some troubleshooting of our connectivity issue.  I got the ball rolling with our WAN provider and as a result we now have a half dozen more sites that have come back online which is awesome.

This afternoon I plan to change the oil in the Tacoma and try to figure out why my windshield washer now trickles out washer fluid like an old man urinating.  It seems that this issue developed after the windshield was replaced.  Hopefully it’s something simple.  I plan to continue my clean up of the chicken area removing/repurposing whatever I can.  I am hoping that now that the storm has passed I can actually respond to the avalanche of FB marketplace messages I received about the stuff.

I also have decided that I am not going to be going out to LA for the EUC event mid-October.  The storm has postponed my CT until an undetermined date and I am going to be needed to facilitate whatever comes up with post storm logistics at work.  I actually have already come up with another idea which I prefer, just going out there sometime before the end of the year and meet up casually with a much smaller group of people I know in the area.  It will be a much more relaxing pace for me and more enjoyable.

Here are the various videos I produced over the last few days.