So with a new Nvidia card in hand I stopped back at Ali’s on my way home Friday to hopefully fix her video/monitor issue for good.  I was 80% sure a different chipset video card would solve my problem.  It didn’t.  Instead I fought with her system for another hour or so.  Not only did the new card show the exact same behavior (driver crashing) I eventually lost IP connectivity as well.  I was pissed.

Thankfully I came up with a temporary remediation plan.  Ali still had her old pc I replaced in her office.  It was left online in case there were any files on it that she still might need.  I hooked it up to the monitors and it still worked fine.  I just had to update a few settings and refresh her Dropbox so she was able to work again.  I took the computer I was fighting with me so I could continue battle in the comfort of my own home.

I f’d with it for a couple more hours until I gave up and just did a Windows 10 “reset” where it reinstalls the OS but leaves the user files alone.  It meant I had to reinstall some applications but overall it was not bad to recover from.  I wished I chose that option earlier.  After completion the video driver finally loaded normally and the IP/internet connectivity had been restored.  It was a huge pain in the ass overall which I think all began with the installation of the Windows 10 “Creators” update which never installed correctly.

Saturday morning we again went out for a run first thing.  The temps in the low 70’s with HIGH humidity were not comfortable to run in at all.  Cindy and I hardly said a word during the run.  Afterwards I told her that it felt like I was uncomfortable from the first stride to the last stride.  Sure it’s nice to endure one of those types of runs but I sure wouldn’t mind one that felt psuedo-enjoyable once in awhile.

When we got home I jumped right into an all morning yard session that started with weeding and ended with mowing.  I was very thorough in my efforts and the yard looked great at the end of it but man, I was pooped.  Adding the secondary chicken fence definitely has tacked some time onto my normal yard maintenance schedule.

Saturday afternoon we took Sadie and Elsa to Rural King for a few things.  Elsa was back to acting very skittish for some reason as we walked the aisles.  You just never know what is going to freak her out.  After we got back the skies absolutely opened up.  Torrential rain came down for hours.  I did not see an official total but I bet we got at least 3″ of it dumped on us. Saturday night we stayed home and watched the most recent Huntsman movie which was pretty good, B+ in my book. 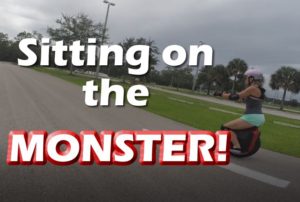 Sunday morning despite the skies still being overcast Cindy and I headed to North Collier Park to ride.  I brought the new seat for the Monster I was sent by Jason from ewheels.com

We had a fun conventional ride first before we got out the seat.  I wanted Cindy to try seated riding first as she messed around with it the week prior without a seat and did half decent.  After a pretty brief acclimation period Cindy was zipping around the park on the Monster in the seated position like a pro.

Cindy’s biggest complaint about EUC riding is the foot pain she experiences.  Riding on the seat totally alleviates that pain.  She said the feeling of seated riding was weird.  It reminded her of the same position she had on her motorcycle and scooter, without handlebars or a second wheel of course.  I was really impressed with how well she did seated.  I later tried myself and had only minimal success.  Feel free to check out the fun below.

Sunday afternoon we went to a rare matinee showing of Wonder Woman.  The movie looked pretty epic from the trailers and I was looking forward to seeing it.  Like all DC super hero movies, I liked the movie but didn’t love it.  (Cindy loved it)  I thought the first half of the movie was particularly slow and that was exaggerated by the overall length of the film, something like 2:20.    Some of the stuff that was revealed in this origin story was news to me so I am not sure if it is all true to comic book story lines or not.  By the end of it Wonder Woman seemed to have basically transformed into Supergirl.  Anyway, it was enjoyable overall but reaffirmed when it comes to super hero movies, nobody does it like Marvel. B+

It was a good way to close out another fun weekend.

Yep I am not overlooking the latest terror attack in the UK but really, what I have said before is all I would say again.   Who wants to be a broken record….